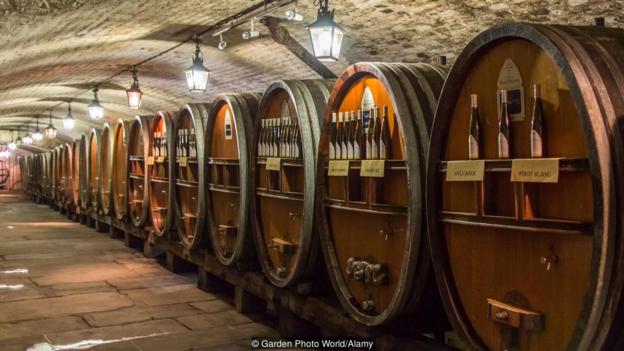 The French patients ‘cured’ with wine

The father of medicine, the Greek physician Hippocrates, experimented with a number of wine varietals to treat various ailments, believing that, “Wine is an appropriate article for mankind, both for the healthy body and for the ailing man.” In modern times, we’re generally taught to drink in moderation, but in France, which traces its viticulture back to the 5th Century BCE, ‘à votre santé’ – or ‘to your health’ – was a toast that still rang true until the turn of the 21st Century.
To learn more about France’s deliciously incestuous relationship between wine and medicine, I needed to visit a wine cellar deep in the bowels of a medieval hospital in Strasbourg, located in the Alsace region of eastern France.

Hippocrates believed that “Wine is an appropriate article for mankind, both for the healthy body and for the ailing man” (Credit: FREDERICK FLORIN/AFP/Getty Images)

Strasbourg, a modern city with a 2,000-year history, is perhaps best known for its centre (the Grande-Île), which was listed as a Unesco World Heritage site in 1988. Travellers flock here to wander through its world-famous Christmas market, Cathedral Notre Dame and Palais Rohan, as well as to dine in typical Alsatian winstubs (wine restaurants) such as Restaurant Chez Yvonne or Maison Kammerzell, which sits in a building dating 1427.
You may also be interested in:
• The French town that throws wine in the sea
• Did wine cause a full-scale revolution in Armenia
• Machiavelli’s secret tunnel to fame
But I was heading to the Hôpital civil de Strasbourg, a teaching hospital that was founded 1119. On that late, rainy evening, the streets were empty, and as I walked over the wet cobblestones with two companions, it was easy to imagine what the city might’ve looked like hundreds of years ago.
Since 1395, the Hôpital civil de Strasbourg has had a symbiotic relationship with the Cave Historique des Hospices de Strasbourg (Historic Wine Cellar of Strasbourg Hospices), which lies directly beneath the hospital: one literally wouldn’t exist without the other. For around 600 years, many of the hospital’s patients paid their medical bills with tracts of vineyard – and the grapes grown on these newly acquired lands were then made into wine in the cellar. This was a common practice in France, as the vineyards provided income for the hospitals; and the cellars – which functioned as large refrigerators – were the perfect places for keeping wine cool.
People from all over France came to the hospital to receive ‘wine treatments’, which were exactly what they sound like: up to two bottles a day of wine to treat various ailments.

Since 1395, the Hôpital civil de Strasbourg has had a symbiotic relationship with the Cave Historique des Hospices de Strasbourg (Credit: Garden Photo World/Alamy)

Although wine treatments were ubiquitous in ancient times, Thibaut Baldinger, the manager of the cellar who had graciously agreed to stay late to give my companions and me a tour, said that he had seen proof that wine had been used as medicine since the 1960 – and that the treatments weren’t stopped until 1990.
Some treatments perhaps worked better than others
A bottle of Châteauneuf-du-Pape, for example, would be prescribed for bloating, while a bottle of everyone’s summer favourite, Côtes de Provence rosé, was used to treat obesity. High cholesterol? Just two measly glasses of Bergerac. For herpes, patients were told to bathe in a lovely Muscat de Frontignan. Trouble with your libido? Six dreamy glasses of Saint-Amour purportedly lubricated ailing lovers into Casanovas in no time at all – interestingly, two fillettes, or carafes, of this wine were also said to work for maladie de la femme (women troubles).
“What about the liver?” I quipped? Baldinger laughed: “Some treatments perhaps worked better than others.”
I did later note, however, that the list of wine treatments included three entire bottles of Beaune Eau Gazeuse (Beaune wine mixed with sparkling water) for ‘cirrhose’, leading me to believe that at least one person from modern history believed inebriation to be an antidote to liver failure.

Although the hospital’s wine treatments ended several decades ago, the cellar continues to play an important role in France’s winemaking history by continuing to showcase some of France’s finest wines while financially supporting the hospital. In 1995, however, the 600-year-old cellar was nearly relegated to history books for what Baldinger called a “lack of profitability”.
Over the 20th Century, the hospital sold off tracts of vineyards to finance certain hospital projects that required immediate attention, effectively stemming the supply of grapes to the cellar. The cellar was then forced to abandon its giant oak wine barrels after new French law – the Loi Évin – was passed in 1991. The law had strict provisions meant to prevent alcoholism, which meant the government no longer looked kindly upon booze in the basement of an établissement de santé, or health facility.
Baldinger’s predecessor, Philippe Junger, became the de facto defender of the cellar by rallying the support of Alsatian wine growers and creating the Society of Agricultural Collective Interest (SICA). The collective found ways to convince lawmakers to keep the cellar open by arguing its importance as part of the region’s heritage.
Successfully saving the historical site, dozens of Alsatian vineyards began working to improve their wines under the watchful eye (and nose) of Junger and the cellar’s oenologists. Since 1996, a competitive blind tasting has been conducted every January: any wine that doesn’t make the cut is booted from the cellar.

Today, the cellar produces 140,000 bottles of Gewürztraminer, Klevener de Heiligenstein, Sylvaner and Riesling per year, using grapes grown by 26 different wine partners. The wines are aged for six to 10 months in mammoth oak barrels before being bottled and sold to the public. Amazingly, the cellar does no advertising of any kind and has only a website. “Every wine-making partner gives a small percentage of his production to the historical cellar shop, as rent,” said Baldinger. The proceeds from the cellar’s portion of the production are invested into the purchase of medical equipment for the hospital, while the partners benefit from the lion’s share of the wine.
There are some wines in the cellar that are never sold. Baldinger pointed to a small cabinet adhered to the cellar’s stone wall. Inside the dimly lit case was a skull and a clear bottle of wine – the liquid inside discoloured by age to rust-red, like dried blood – on which was written a date: 1472. “There’s some speculation that the skull belonged to Mister Arthur, the first cellar master. He might’ve had too much of the wine,” Baldinger said.

And the story of this rust-red wine – the first produced by the cellar? “I’ll show you,” replied Baldinger, leading us away from the case and between two rows of giant oak barrels. There, an old, imposing iron gate separated the cellar from a storage area, in which sat about half a dozen smaller, older oak barrels. Baldinger pulled a large skeleton key from his pocket and opened the gate to where the cellar’s Vin Blanc d’Alsace (White Wine of Alsace), what is believed to be the world’s oldest barrel-stored white wine, is kept.
Baldinger explained that this wine has only been tasted three times: The first was in 1576, when the inhabitants of nearby Zürich (more than 200km to the south-east) shipped a giant kettle of porridge to Strasbourg to show that the city would provide assistance if there were ever a need. In less than 24 hours, the porridge arrived, still warm. Baldinger says that Strasbourg responded in kind by uncorking the city’s fabled wine and giving some thirsty Zürichers a sip.
The second tasting was in 1718, during the reconstruction of the hospital following a devastating fire, when the pharmacy (which 200 years ago was a bakery), the Protestant chapel and the wine cellar were the only buildings not affected by the disaster. “A phial containing the wine from 1472 was symbolically set down into the first stone of the new building and, on this occasion, the wine was tasted for the second time,” Baldinger explained.
The final time the wine was drunk was in 1944. During World War Two, the cellar had operated under Nazi control (who, according to Thibaut, filled most barrels with their favourite wine: Bordeaux). After the end of the war, just after the liberation of Strasbourg, General Leclerc (who would later become Marshal of France) took a celebratory sip of the vintage.

The cellar houses what is believed to be the world’s oldest barrel-stored white wine, which dates to 1472 (Credit: Melissa Banigan)

Most visitors to the cellar aren’t even allowed past the gate, but perhaps sensing our enthusiasm, Baldinger asked if we wanted to smell the cellar’s crown jewel of wine. Bien sûr, we replied.
Baldinger reached up to the top of the oak barrel and gently jostled the cork until it came loose. Slowly, he waved the cork beneath our nostrils, allowing the wine’s bouquet to hit our olfactory organs.
Cognac. I’m no trained sommelier, but similar to French brandy, the wine smelled jammy, a little pruney, with hints of vanilla as well as what reminded me of my grandfather’s old cigar box.
“It smells lovely,” I said hopefully. “Perhaps just a little sip?”
Baldinger shook his head. The pH level of the wine, he said, is now 2.28 – far too acidic to drink without causing a sour stomach (most white wines have pH levels higher than 3.0).

The wine from 1472 has only been tasted three times (Credit: Andia/Alamy)

Not all the wine contained in the barrel was produced in 1472, however. “We add wine each time the cork is dry,” Baldinger said. “Four times a year, about four to six litres are added to the original 400 litres. We select a Riesling or a Sylvander that has aged in our cellar.”
And the original grapes used in the wine? “Unfortunately, we don’t know,” Baldiner said. “There’s been a lot of mutation over the years, and a lot of mixing of grapes in the vineyards.”
I sighed while watching Baldinger recork the barrel – I would have been willing to suffer a temporary upset stomach just to be able to say I had tried that special wine. Besides, shouldn’t there be a wine treatment for such an ailment?

Wine is aged in the Cave Historique des Hospices de Strasbourg for six to 10 months before being made available for purchase (Credit: Melissa Banigan)

Fortunately, there were plenty of other vintages to taste. Baldinger uncorked a bottle of Gewürztraminer and gave each of us a healthy pour. We sat for a few minutes around a table with a red-and-white checked tablecloth and took a sip: sweet, with a bouquet of lychees, it was both delicious and fortifying on such a damp, rainy night – in fact, up until 1990, two glasses of the stuff were used to treat infection.
So, as we left the cellar, I bought a bottle of the Alsatian ‘medicine’ to gift to my family for their medicine cabinet – or dinner table – back home.

@ The online publishers  you can sell your resources and eBooks

Want To Start Selling Your Photos Online? Here Are the Steps to Follow.

How Should Governments Go Seeking Out Investors For Foreign Direct Investment?.

3 Ways TOP Platform Can Help You With Online Lobbying.

Where To Find Original Online Photos Gallery For Sale.

4 Benefits To Joining with TOP For Online Reputation Management Service.

5 Reasons To Go With TOP for All Online Reputation Repair.

4 Benefits To Partnering With TOP Platform For Translation Services Work.

3 Simple Benefits for Advertisers to Registering with TOP.

The Importance Of Finding Great Photos For Any Website

Work on cell response to oxygen gets medicine Nobel.

How to trend on social media.

The Rohingya’s Right of No Return.