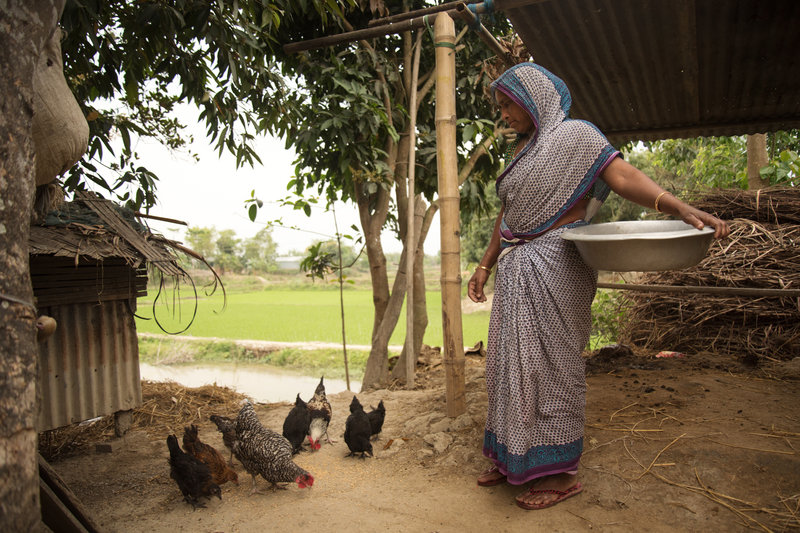 Tobiron Nessa has lived in the same impoverished village in northeast India all her life. So has her husband. They married young and raised five children, and now, at age 45, Nessa is about to become a grandmother.

But she has suddenly found herself in an unexpected predicament: Nessa is now the only one in her immediate family whom the Indian government recognizes as a citizen. Her husband and five children have all been left off the National Register of Citizens.

The NRC is like a census, but it has only ever been conducted in one Indian state, Assam, which borders Bangladesh and has long received immigrants from there. The NRC process began back in 1951, when Bangladesh was known as East Pakistan.

Religion was never a basis of citizenship. But the BJP is making it so, just to show they’re pro-Hindu.

Ever since, Indian authorities have been trying to figure out who was born in India, whose family has been living in India for generations and who might be an undocumented migrant from what is now Bangladesh.

Indian citizenship is generally granted according to parentage rather than location of birth. With some exceptions, people are usually given Indian citizenship if at least one parent is Indian — though the requirements have become more stringent over the decades.

For migrants in Assam, the key date for Indian citizenship is March 24, 1971 — days before Bangladesh declared independence from Pakistan, leading to a war. People who migrated to India from there before that date are considered Indian citizens. But those who migrated to India after the cutoff date are considered undocumented — and they are whom the NRC aims to exclude.

Families in Assam are required to submit paperwork to prove their Indian citizenship under the NRC. They’ve done so for decades, but authorities never informed people of whose paperwork passed muster and whose didn’t. That is, until the Hindu nationalist Bharatiya Janata Party of Prime Minister Narendra Modi came to power — nationally in 2014 and in Assam’s state government in 2016.

Last year, for the first time, state authorities issued a preliminary list of citizens. Four million people who thought they were Indian were not on it. Most of those left off the list, like Nessa’s family, are Muslim.

India’s constitution grants people of all faiths equal protection under the law. But Assam’s Muslims fear that the NRC is being used to illegally strip them of Indian citizenship and mark them for deportation — to skew even further the state’s demographics in favor of the Hindu majority. 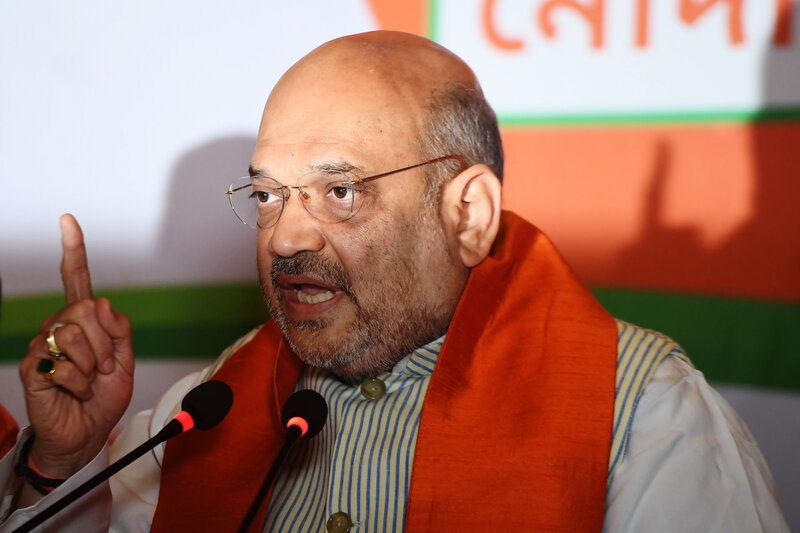 Amit Shah, the national president of the Bharatiya Janata Party, seen here last month in Kolkata, has referred to immigrants from Bangladesh as “termites.”

The BJP seeks a greater role for Hinduism in government and public life. At a campaign rally last month, the party’s president explained in no uncertain terms how the NRC might play a role in that mission throughout India.

“These infiltrators are eating away at our country like termites,” BJP President Amit Shah told rallies on April 11 in the state of West Bengal. “The NRC is our means of removing them.”

He used the words “infiltrators” and “termites” to refer to Muslim migrants from Bangladesh who may have entered India illegally. It wasn’t the first time he’d referred to such migrants as “termites,” something the State Department noted in its 2018 human rights report. 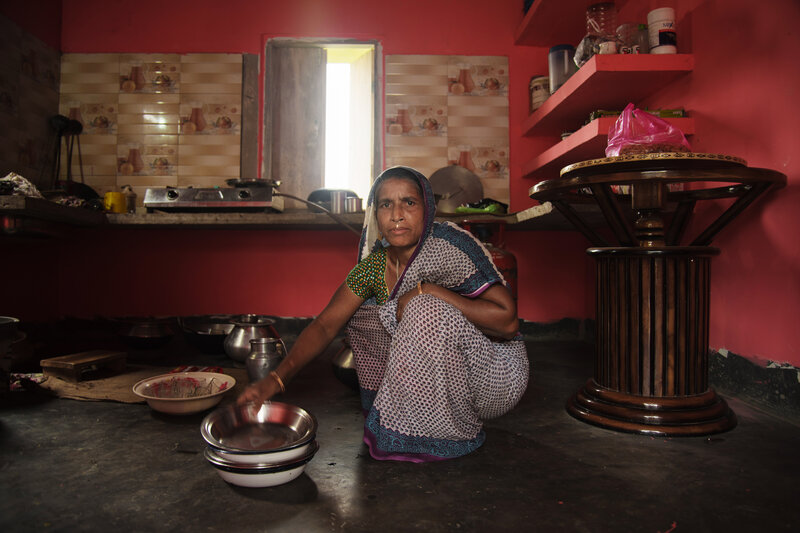 Nessa has lived in the same impoverished village in northeast India all her life. Indian citizenship allows her family to qualify for food rations. “We’re poor, and we rely on government food rations — seven of them, one for each member of our family,” Nessa says. “I’m worried we’ll lose them.”

Shah said the NRC should be extended to all of India and suggested that all Indians should have to prove their origin — and if they can’t, they should be deported, though it’s unclear where exactly they would go.

In Bangladesh, officials have called India’s NRC a “local internal matter” with “ethnic undertones” and have denied that any Bangladeshi citizens are in Assam illegally.

For Nessa, citizenship is about survival.

“We’re poor, and we rely on government food rations — seven of them, one for each member of our family,” Nessa says, washing dishes at an outdoor pump next to her home, between rice paddies. “I’m worried we’ll lose them. We rely on this assistance.”

She worries that her husband and children, including her pregnant daughter, could be detained — even deported. But to where? Nessa says they all have Indian birth certificates.

“Many people have proper documents. Still, they have been declared foreigners and thrown into detention camps,” says Akram Hussain, a Muslim community activist who visits detainees in Assam centers and helps them file appeals to reinstate their citizenship. 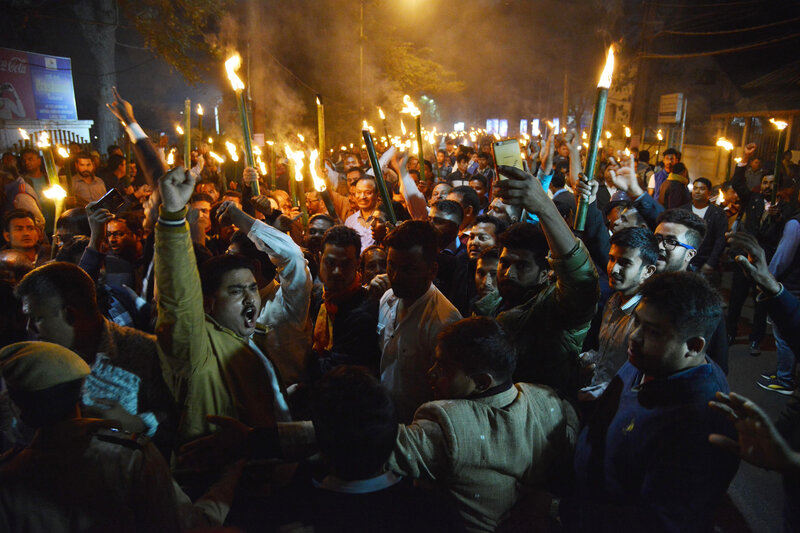 Demonstrators clash with police while protesting against the Citizenship Amendment Bill during a visit by Prime Minister Narendra Modi to Assam in February. The bill seeks to grant Indian citizenship to minorities fleeing religious persecution in predominantly Muslim Bangladesh, Pakistan and Afghanistan.

Several hundred people are being held in at least six detention camps across Assam. The state has set up tribunals and detention centers, much as the U.S. has done along the U.S.-Mexico border. India’s ruling party says Islamist terrorists are trying to infiltrate the country’s borders.

Hussain says up to a third of residents in the Kamrup region of Assam have been left off the government’s draft citizenship list — including his own 12-year-old daughter.

Because the NRC list is preliminary, people left off it face no immediate repercussions. They can still appeal their status. They are able to vote in the current parliamentary elections, provided they are already registered (though a separate and parallel process in Assam has been striking alleged foreigners from voter rolls there). But at some as-yet-undetermined date, if their appeals are turned down and the list becomes official, they would be stripped of all rights conferred by Indian nationality. Many of them may be rendered stateless or forced to apply for citizenship elsewhere.

Officials acknowledge there may be errors in the draft list, and they do allow time for appeals. Nessa’s family members are appealing their citizenship status. The process requires people to wait in long lines at government offices and submit more paperwork — in duplicate and triplicate — in support of their cases. It can be daunting, especially for those who are poor and illiterate.

All of this is happening in a corner of India that has long been celebrated for its ethnic and religious diversity.

“Assam is like a mini-India,” says the state’s former chief minister, Prafulla Kumar Mahanta. He’s a veteran politician and founder of a center-right regional party called Asom Gana Parishad, which lost to the BJP in 2016 state elections.

More than one in three people in Assam is Muslim. The state has a Hindu majority. The neighboring states of Nagaland, Mizoram and Meghalaya are overwhelmingly Christian. The region is also home to Buddhists, Sikhs and indigenous tribal people.

But Assam’s diversity may pose a challenge to Modi’s vision for a distinctly Hindu India. 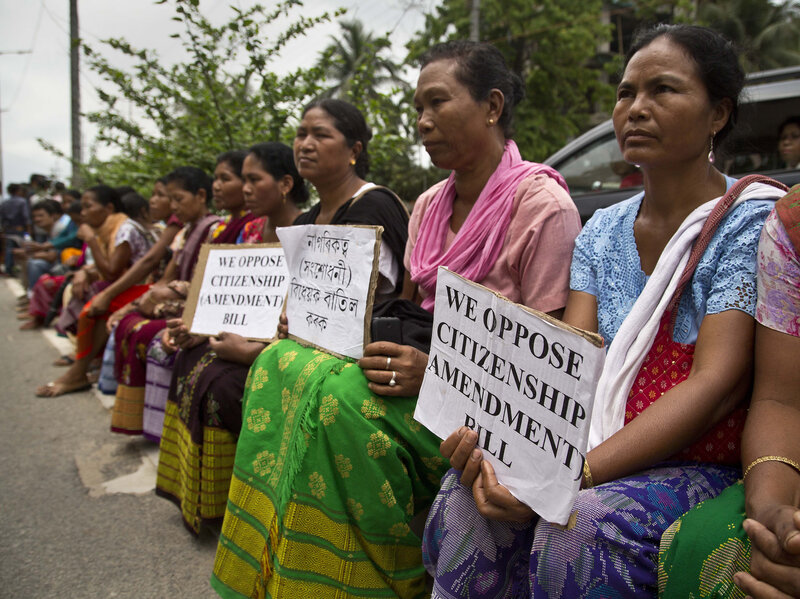 In Guwahati, Assam, in May 2018, indigenous women protest the Indian government’s move to provide citizenship to minorities from Bangladesh, Pakistan and Afghanistan.

During a February visit to Assam, Modi talked about “Mother India” being a homeland for Hindus everywhere. To that end, his government has introduced a Citizenship Amendment Bill to grant Indian nationality to anyone who is persecuted in a nearby country — except if they’re Muslim.

The bill is aimed at religious minorities — Hindus, Sikhs, Buddhists, Jains, Parsis and Christians — in Pakistan, Afghanistan and Bangladesh. (The citizenship offer does not apply to hundreds of thousands of Rohingya refugees in Bangladesh, who are Muslim.)

During the February visit, at a rally, Modi explained his reasoning: When India gained independence from Britain in 1947, it was partitioned into Muslim Pakistan (and later, Bangladesh) and secular India. Muslims already have homelands, his logic goes, but other faiths need India to make room for them.

But to many in India’s northeast, it looks as if Muslims who were born there and have lived there for years are losing their citizenship through the NRC — even as the government wants to grant citizenship, via the CAB, to non-Muslims who may have never set foot in India.

“The state wants to roll out the red carpet to people based on religion — Hindus from Bangladesh. But it has a problem with Muslims who have lived here for 400 years,” says Aman Wadud, a human rights lawyer in Assam.

The CAB passed the lower house of India’s Parliament in January and awaits final approval by the upper house after the current national election. Modi is running for a second five-year term, and nearly six weeks of voting will end on May 19.

Meanwhile, demonstrations have erupted across northeast India. Some call for protection of the rights of local Muslims. But the vast majority have been anti-immigrant rallies. If minorities from neighboring countries are suddenly granted Indian citizenship under the CAB, it is India’s northeast — which borders five countries — that would likely absorb them. Residents are worried that newcomers could drain public coffers.

Experts say both of these BJP policies disadvantage Indian Muslims. The NRC would reduce their numbers in real terms by stripping them of citizenship. The CAB would reduce their percentage of India’s population by adding non-Muslims to the country.

“I think this is quite telling about who they see as ultimately finding a place in this kind of new, proudly Hindu India,” says Milan Vaishnav, director of the South Asia Program at the Carnegie Endowment for International Peace in Washington, D.C.

Critics also suggest that the Citizenship Amendment Bill may violate India’s constitution because it would use religion as a criterion for Indian citizenship for the first time. Articles 14 and 15 of the constitution establish “equality before the law” and prohibit the state from discriminating against any citizen on the grounds of religion.

“Religion was never a basis of citizenship. But the BJP is making it so, just to show they’re pro-Hindu,” Wadud says.

If India, under Modi, wants to become a Hindu state, experts say there are a few possible scenarios: It could prioritize the rights of its majority Hindus and become a homeland for Hindus worldwide — just as Israel is a homeland for Jews and Pakistan was created as a homeland for Muslims. Or it could model itself after Turkey, a secular country whose majority faith, Islam, has played a larger role in public life under President Recep Tayyip Erdogan.

If reelected with a big majority, Modi’s BJP may perceive a mandate to try to alter the constitution and insert religion as a standard for citizenship, says historian Romila Thapar, professor emerita at Jawaharlal Nehru University in New Delhi.

But it’s more likely, Thapar says, that Modi would seek to change the country in more subtle ways — which are already being used.

“They can use other agencies in order to bring in virtually a Hindu state: education, jobs, who is to be employed, control over the media, for example,” Thapar says. “It is amazing how much the middle class has bought this whole idea of Hindu nationalism without really thinking about it.”

Thapar believes that if Modi is reelected, he’ll push forward with a fundamental change to India’s character.

3 Reasons That TOP Platform Is The Best Ebooks Hub.

Where To Go To Buy From An Online Photos Gallery.

TOP Gives Writers A Way To Earn More By Selling In The Ebooks Library.

3 Ways To Get Ahead Of Reputation Repair With TOP.

No Better Option For Online Reviews Than TOP.

2 Ways TOP Helps You Earn For Reviews You Write.

4 Reasons To Go With TOP When You Need Online Reputation Building Solutions.

5 Reasons You Should Consider Doing Translation Work For TOP.

For Advertisers To Make More TOP Is The Answer.

Their city lacks public spaces for protests, so Beirut residents made their own.