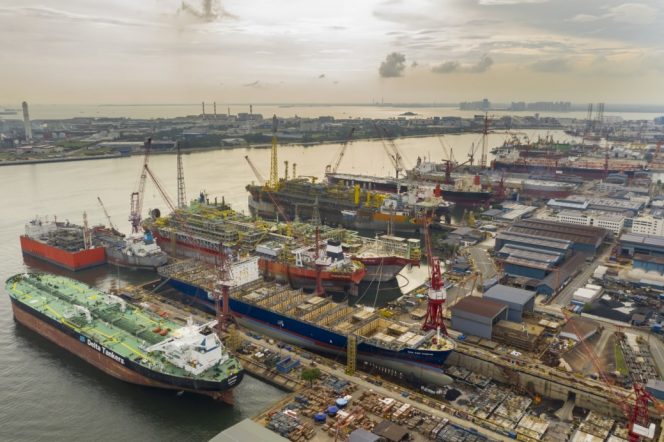 Singapore’s offshore drilling rig and vessel construction company Keppel O&M has returned to profit in the first half of 2019. The order book is at 2016 high, with a large chunk of new orders coming from renewables and LNG sectors. Keppel has also employed more than 700 people in 2Q.

According to Keppel Corporation’s results released Thursday, Keppel O&M reported a net profit of S$10 million for 1H 2019, compared to a net loss of S$40 million a year ago, “due mainly to higher investment income, lower net interest expense and a higher share of associated companies’ profits.”

Year to date, Keppel Offshore & Marine has secured S$1.9 billion in contracts, up from S$1.7 billion a year ago.

Mostly notable for the construction of oil and gas drilling rigs and other oil industry facilities, Keppel has recently added large offshore wind-related contracts to its order book.

The company has recently won about S$720m worth of offshore wind projects for Germany and Taiwan from TenneT and Ørsted respectively.

During the first half, Keppel delivered two FPSOs, two jack-up rigs, and three dredgers. It has also struck steel for Gimi FLNG, destined for deployment at BP’s Tortue/Ahmeyim project in West Africa.

Commenting on the results and the outlook, Keppel CEO Loh Chin Hua said that as the market for offshore drilling rigs remained challenging, Keppel O&M continued efforts to reshape its business were bearing fruit, especially in the renewables sector.

“As demand for offshore renewables continues to gain traction, we will leverage and extend our capabilities in offshore engineering and construction to tap on this fast-growing adjacent sector,”

According to the CEO, close to 60% of the new orders in the first half of the year was in the space of LNG and renewables sectors.

“This is the highest that our net order book has been since 2016…” the CEO said.

While Keppel O&M is taking steps to diversify into renewables, the biggest part of the order book is related to FPSO/FLNG construction – S$2.4 billion.

“In the first six months of 2019, Keppel O&M continued to focus on delivering its projects well. We delivered two FPSOs, including Liza Destiny, Guyana’s first FPSO, which was delivered to SBM for ExxonMobil’s Liza Field. We will soon commence work on a second FPSO for the Liza Field,” Loh Chin Hua said.

The Liza Destiny FPSO, converted by Keppel from a VLCC, has departed Singapore this week and is expected to reach Guyana in September.

Keppel O&M CEO has also shared that the company has increased its workforce in the second quarter of the year.

“Text, images, and video are the paint swatches of 21st-century artists — with a single catch: this form of art has to communicate, engage, and sell.” ― Laura Busche – Visit THE ONLINE PUBLISHERS for high quality content creation services and professional, artistic photography.

How TOP Helps With Finding Clients For Making Money Online With Social Media.

Looking For The Right Ebooks To Read With TOP.

How Advertisers Can Get More Out Of A Site With TOP.

The rise of superbugs: Facing the antibiotic resistance crisis.

5 Tips to Keep Your Nails Strong.