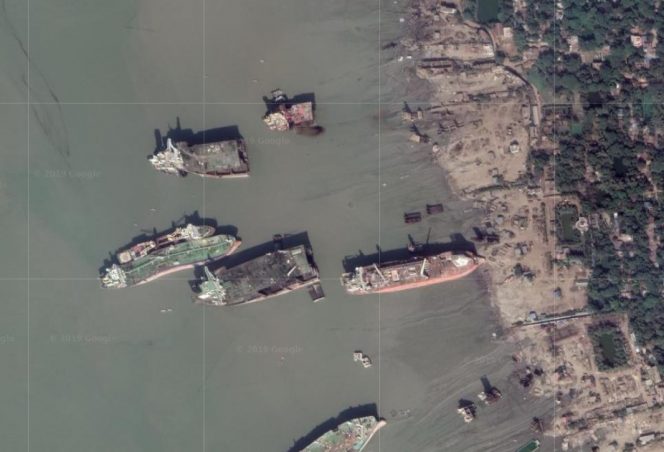 The FPSO was sold in 2016 by a 50-50 JV owned by Denmark’s Maersk and Brazil’s Odebrecht. The vessel left the UK during the same year and was towed to Chittagong in Bangladesh – a place notorious for poor working conditions and environmental pollution with workers there dismantling giant ships using blowtorches, wearing only shorts and flip-flops, and no safety gear – to be scrapped on a beach.

Maersk at the time claimed it had sold the vessel – which was later found to contain high levels of radioactive materials – for redeployment, and that it didn’t know the vessel would be scrapped in Bangladesh.

According to the Shipbreaking Platform NGO, which is working to put an end to beaching and dirty and dangerous scrapping of end-of-life vessels on beaches in Bangladesh and India, the High Court Division of the Supreme Court of Bangladesh on November 14 declared the import, beaching and breaking of the FPSO North Sea Producer illegal. The judgment was issued in a Public Interest Litigation (PIL) filed by NGO Shipbreaking Platform member organization Bangladesh Environmental Lawyers Association (BELA). The NGO said that the court passed several directions upon the Bangladesh government to regulate the sector.

The NGO said that the Bangladesh Court in August 2017 had issued an injunction on the ongoing breaking of the North Sea Producer based on the detection of radiation levels higher than permitted.

” [The court] has now directed national agencies to monitor the breaking of what is left of the FPSO without any involvement of Janata Steel, the yard that had beached the vessel in 2016. The Department of Environment has also been directed to claim compensation from the yard for having violated national environmental rules.

Rizwana Hasan, Supreme Court lawyer and director of BELA, said: “The judgment is important in that it has expressly called the import, beaching and breaking permits illegal, and for the first time a breaker has been put off the breaking operation and the government has been given the steering. It is even more important because it has required the government to regulate the dubious roles of the cash buyers and restrict import from grey- and blacklisted flag registries. This will surely make it difficult for the unscrupulous players to treat Bangladesh as a dumping ground.”

The NGO said the court had directed authorities to i) subject cash buyers and agents to stricter scrutiny, including a detailed recording of their particulars, and to hold them accountable to the strictest sanctions; ii) regulate the import of vessels registered under “last voyage” grey- or black-listed flags which are particularly popular with cash buyers, including Comoros, Palau and St. Kits and Nevis, and; iii) ensure that no vessel is imported without proper verifiable pre-cleaning certificates and declarations of in-built hazardous wastes, and/or by yards that do not fully comply with the requirements for obtaining an Environmental Clearance.

This is not poor due diligence, this is collusion, NGO says

“Whilst the recent ruling on the illegal import of the North Sea Producer stresses the systemic illegalities of the entire shipbreaking sector, and also highlights the deficiencies of local agencies responsible for the enforcement of environmental and labor laws, the illegal export of the vessel from the UK is still being investigated by UK environmental agency DEFRA,” the Shipbreaking Platform said.

The NOG has said that after winning the case in Bangladesh, it is now urging the UK to hold the ship owners and cash buyer GMS accountable “for the illegal export of the toxic FPSO.”

The North Sea Producer was allowed to leave the UK in 2016 based on claims that it would be further operationally used.

Ingvild Jenssen, NGO Shipbreaking Platform’s Director and Founder said: “Providing fraudulent documentation in order to circumvent existing waste export bans is a criminal offense in Europe and internationally. Maersk and Odebrecht were well acquainted with cash buyer GMS’ notorious trafficking of waste ships. They were also well aware of the illegality of selling the vessel for scrapping in South Asia. This is not a case of poor human rights due diligence, but one where companies collude to earn big bucks on the back of people and the environment. We demand that authorities in the UK follow suit and establish the responsibility of all parties involved.”

From finding a broad variety of good Ebooks to read, to writing some to be included in the ebooks library, TOP platform is a space that has a lot to offer both freelancers and clients with not only the library for ebooks, but with so much more.