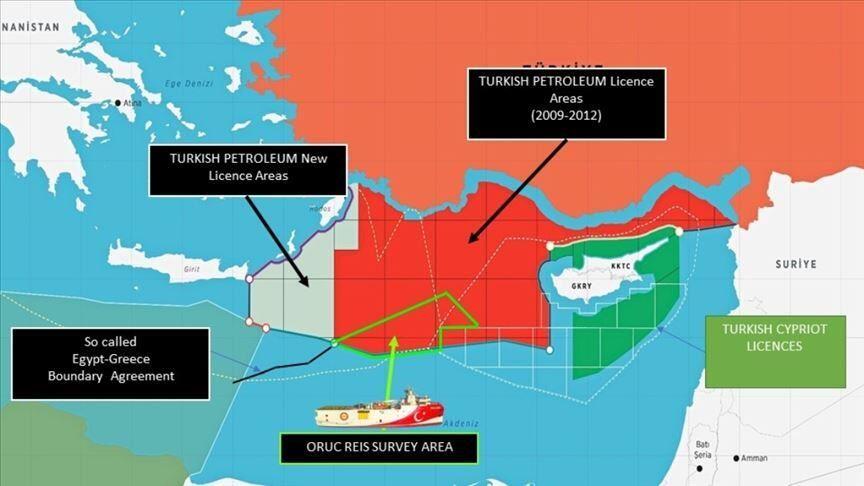 Turkey’s Foreign Ministry shared a map on Aug. 10 showing the offshore survey activity of its seismic research vessel Oruç Reis within the country’s continental shelf and borders of its Exclusive Economic Zone (EEZ) in the eastern Mediterranean.

“The Oruç Reis launched its offshore survey activity today in the Turkish Continental Shelf declared to the U.N. Greece makes a big fuss over this activity,” said Çağatay Erciyes, director general for Bilateral Political and Maritime-Aviation-Border Affairs of the Turkish Foreign Ministry.

Turkey argues that a continental country’s maritime jurisdiction should be based on the mainland, and not islands.

Erciyes said on Twitter that Greece has created problems because of a 10-square-kilometer (3.86-square-mile) Greek island named Kastellorizo, which lies two kilometers (1.24 miles) away from the Turkish mainland and 580 kilometers (360 miles) from the Greek mainland.

“Greece claims 40,000 square kilometers of maritime jurisdiction area due to this tiny island and attempts to stop the Oruç Reis and block Turkey in the eastern Mediterranean,” he said, noting that this is against the principle of equity, international law, and jurisprudence.

“This maximalist claim is not compatible with international law. It is against the principle of equity. Yet Greece asks the EU and U.S. to support this claim and put pressure on Turkey to cease its legitimate offshore activities. This is not acceptable and reasonable,” he said.

Erciyes stressed that these countries should instead ask Greece to stop its unjust, inequitable, and absurd claims.
“It is Greece, not Turkey, who creates tensions in the area due to such maximalist claims,” Erciyes said.

A country with a longer coastline should receive more maritime jurisdiction area, Erciyes said, emphasizing that Turkey has the longest coastline in the eastern Mediterranean (1,792 kilometers).

When a line is drawn at an equal distance between the Turkish and Greek mainland, all Greek islands lying to the east of this line distorts equity. “That’s why Turkey argues that these islands should not be granted to be under CS/EEZ [exclusive economic zone]. This position is supported by several judgments by international courts and state practice,” he said.

Greece cites the 1982 U.N. Convention on the Law of the Sea and argues that its islands, including Meis (Kastellorizo), have territorial waters as well as an exclusive economic zone and continental shelf rights according to some provisions of the convention. The U.N. Law of the Sea Convention recognizes that if an entire country is an archipelago, but Greece is not a country that is composed entirely of islands, a Turkish official told Hürriyet Daily News on condition of anonymity.

Turkey cites the International Court of Justice (ICJ) decision that islands within the natural extension of the mainland do not have a continental shelf or exclusive economic zone rights, the official noted.

Ankara, therefore, applauded a recent agreement between Greece and Italy on maritime boundaries on June 9, saying the deal confirms Turkey’s thesis as Athens has not made any such claims for islands under its sovereignty in the Ionian Sea.

Egypt and Greece signed an agreement last week designating an exclusive economic zone in the eastern Mediterranean, a move aimed to nullify an accord for maritime boundaries between Turkey and the internationally recognized government of Libya.

Earlier this month, Egypt said that part of a seismic survey planned by Turkey in the eastern Mediterranean potentially encroached on waters where Cairo claims exclusive rights.

Ankara and Cairo held talks in the past dating back to 2007 and with the administration of Egypt’s ousted President Mohamed Morsi, in order to sign an agreement on the delimitation of maritime jurisdiction areas, but could not finalize as the Egyptian politician was toppled in a coup by current President Abdel Fattah el-Sisi, the official said.

Blogging is one of the simplest and most lucrative jobs. Many bloggers make a tremendous amount of income with a correctly set up blog targeting the right audience in an ideal niche. ONLINE JOB OPPORTUNITY FOR BLOGGERS