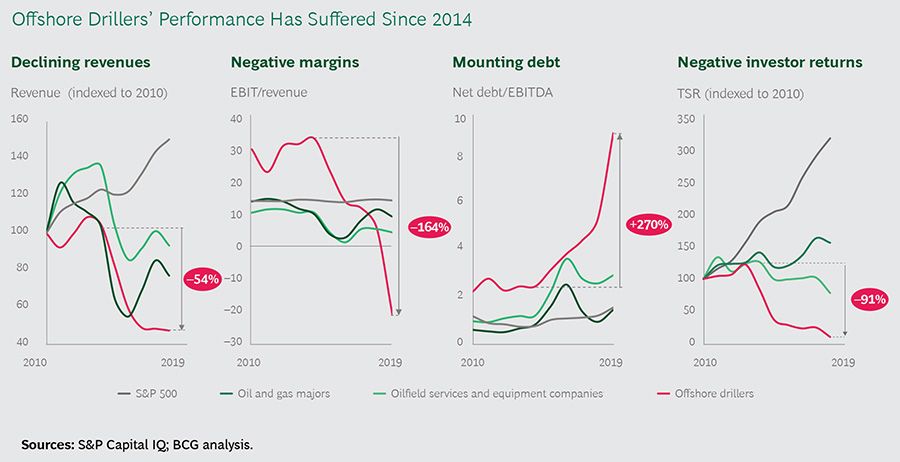 Three priorities for offshore oil drillers to navigate the crisis

The recent plummet in oil demand and collapse in prices has inflicted considerable damage on the oil and gas sector, with few businesses suffering more than offshore drillers. As a result, offshore drillers need to take a number of bold moves to ensure their survival, writes Pablo Avogadri, a Dubai-based partner at strategy consulting firm Boston Consulting Group.

Numbers illustrate a clear picture of the current predicament from a driller perspective and tell the story from the outside looking in. Recently, the oil market recorded its steepest slide in three decades, declining 70 percent within three months. In response, major oil and gas companies reconsidered spending plans.

The 10 largest players by market capitalization announced spending cuts amounting to $130 billion – hitting offshore drilling contractors hard by an estimated reduction in offshore well and exploration spend by $10 billion, who are also ill-equipped to deal with this challenge due to squeezed and low utilization and day rates, with mounting debts.

Contractors had already experienced dreadful performance over the five years before 2020; revenues fell by half, shareholder value dropped by 90 percent, debt has doubled, and income and margins turned negative. In fact, we have witnessed a steep increase in the number of bankruptcies this year, in comparison to the pre-Covid-19 period, with recent news from Diamond Offshore, Noble Corp, and Valaris as an example.

Now, they also face significant structural headwinds. Further to the likelihood of prolonged low oil prices and their effect on industry CapEx, customers with alternative capital deployment options and subcontractors whose demands have not adapted to the industry’s current circumstances also loom.

The offshore drilling sector is at a crossroads. According to market research and analysts, the offshore sector CapEx peaked in 2014 with $146 billion, with the value decreasing to $58 billion in 2020. Therefore bold action is a necessity – an overhaul of value proposition, operating models, and performance.

A mere repeat of the financial restructuring following the 2016 oil price plunge will not be enough to avoid acceleration toward sunset industry status. To achieve the degree of required change – net earnings improvements and returns of investment capital that genuinely transform the industry – drillers must move on three key areas:

According to analysis by Boston Consulting Group, Jackup utilization (the key rig type in the Middle East) globally was at its peak around 2013/2014 at approximately 80 percent. Between 2014 and 2019, the day rates had decreased by approximately 40 percentage points, and the conditions in 2020 with the pandemic will surely further complicate the picture. Also, 35 percent of Jackup and 29 percent of Semi-submersible have already exceeded the average life span but are still in the market.

To reach the level in 2014, an overhaul entailing capacity reduction and industry consolidation must be considered. Trimming capacity to optimal levels demands a clear understanding of a company’s target state and will involve difficult decisions concerning asset segments, customers, and regions on which to focus.

In turn, drillers should explore opportunities to consolidate, and getting the timing right on acquisitions, alliances, and asset divestment will be critical to maximizing value realization. For instance, an analysis of more than 50,000 deals over the past four decades revealed that those concluded in weaker economies generate for buyers up to 8 percentage points higher returns on equity than in flourishing environments.

Drillers must identify and assess prospective targets, aligning with stakeholders regarding potential moves early so that the company is positioned to strike boldly and decisively when the opportunity arises.

Many drillers have the potential for further efficiency improvements through the deployment of disruptive operating models, by rethinking technology, operations, and management of teams. These will be key differentiators among companies with similar fleets and assets, especially given the speed at which change is coming.

Staffing efficiency is also particularly important when considering future drillers will work with a multiskilled and lean offshore crew that is more than 30 percent smaller than today’s standard. To achieve such efficiency, increased staff productivity is a necessity, as is greater use of automation and remote-performance options that allow companies to shift as much work onshore as possible.

Contractors offer rigs and crews on a day-rate basis. Although this model has been extremely lucrative historically, it no longer fits today’s reality. Drillers must rethink their value proposition and adopt a new model that addresses the need to exploit new sources of revenue, such as risk-based integrated drilling services and additional well-drilling and completion service. Doing so will move them away from a cost-plus model toward one that enhances value for customers and drillers alike.

As drillers take on additional risks and provide more services, they need to make this explicit in their pricing model with respect to performance, incentives, and risk-sharing – delivering legitimate value faster, more cheaply, and with greater efficiency. Contractors should review their longer-term options and explore new opportunities on how they can repurpose their capabilities to capture new markets.

For example, decommissioning services may be a potential opportunity as it can be attractive in terms of growth (research has shown that the offshore abandonment market was valued at $3.5 billion in 2015 and expected to be valued at $5.7 billion in 2030). Such a model would lighten balance sheets and facilitate deployment toward efficient operations.

The upcoming path for most offshore drillers will undoubtedly present a certain degree of turbulence, and the days of outsized margin are probably gone forever. But by rethinking their business and being willing and able to make bold moves now, leading players can position themselves for healthy returns when the market finally stabilizes.

Experience the freedom you have always wanted in business, incorporate your new company offshore in Vanuatu today.  Easy to do. Very profitable.  More information available. #topcompanyformation.com