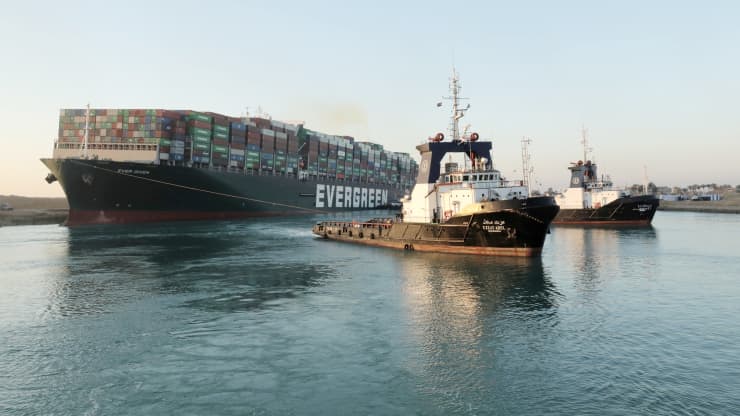 The Ever Given, the massive container ship that became wedged in the Suez Canal and cut off traffic in the vital waterway for almost a week, has been refloated, authorities said Monday.

The ship sailed north to the Great Bitter Lake, arriving there just before 1 p.m. ET, according to Leth Agencies, which is a transit agent at the Suez Canal. The vessel will now undergo a technical inspection.

Earlier on Monday, the Suez Canal Authority said the ship had “responded to the pulling and towing maneuvers” and had corrected its course by 80%.

The Ever Given is one of the largest container ships in the world. The 220,000-ton vessel is able to carry 20,000 containers, and stretching more than 1,300 feet is almost as long as the Empire State Building is tall.

The ship, which ran aground last Tuesday, created further disruptions in a global supply chain already straining under the ongoing impacts of Covid-19.

Bernhard Schulte Shipmanagement, the technical manager of the ship, said last week that the Ever Given ran aground due to heavy winds. Over the weekend Suez Canal Authority Chairman Osama Rabie said that human or technical error may have played a role in the ship deviating from its course.

Expert salvage crews were called in to help with the refloat operation. More than 10 tugboats were on the scene, as well as specialized dredging equipment. More than 20,000 tons of sand and mud were removed during the dredging operation.

“Today, the Egyptians have succeeded in ending the crisis of the delinquent ship in the Suez Canal despite the tremendous technical complexity that surrounded this process from every side,” Egyptian President Abdel Fattah El-Sisi said Monday in a tweet.

The ship’s refloating means traffic can resume in the Suez Canal. Nearly 19,000 ships passed through the canal during 2020, for an average of 51.5 per day, according to the Suez Canal Authority.

More than 350 vessels are currently waiting on either side of the canal, according to estimates from Leth Agencies. This includes container ships, bulk carriers and oil tankers. As the Ever Given remained lodged last week, some ship operators opted to re-route vessels around the Cape of Good Hope, adding more than a week of additional sailing time, while also increasing fuel costs.

After the Ever Given arrived at Great Bitter Lake, the 43 ships that had previously been stuck there resumed transit, according to Leth Agencies.